Located in the north of the Mozambique Channel in the Comoros archipelago, the island of Mayotte, with its 1,500 km² lagoon classified as a marine protected area, one of the largest in the world, and its terrestrial environments, is one of those high places where preserving the diversity of flora and fauna is a major challenge.

For several years, the Departmental Council of Mayotte (CDM) has been implementing means for the conservation of natural areas that are home to various exceptional species, such as marine turtles. This commitment initiated since 1993, when public action was still concentrated around state structures, with the setting up of teams in charge of sea turtle monitoring and continuous night-time surveillance from 1998 onwards at Grande Sazilé and Moya.

The extension of the decentralisation laws to Mayotte in 2004 resulted in the transfer of environmental competence to the Departmental Council.

Thus, from 2006, the CDM undertook to manage the sites of the Conservatoire du littoral through a framework agreement, which was renewed in 2017 for a period of 6 years.

The beaches of Mayotte are home to two species of marine turtles: mainly the green turtle (Chelonia mydas) and the hawksbill turtle (Eretmochelys imbricata). The main nesting sites are Moya and Saziley-Charifou. The particularity of Mayotte is that green turtles come to the beaches all year round, with a peak in numbers from March to August; whereas the hawksbill turtle spawning season is from the end of August to mid-May.

Highly threatened at the global level, the green turtle is considered endangered by the IUCN, while the hawksbill turtle is classified as critically endangered. All species of marine turtles are protected by the ministerial decree of 14/10/2005 and additionally in Mayotte by the prefectural decree N°361/DEAL/SEPR/2018. 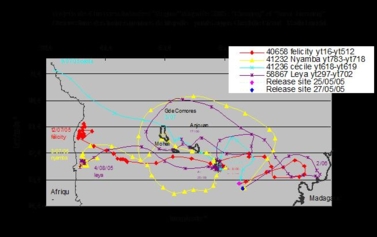 Scientific programmes began in 1993 with track counts on various beaches. In 1994, an assessment of beach use was carried out by Jacques Fretey (IUCN), who set up the Monel tagging programme, which was applied by CDM staff until 2018.

From 1997 onwards, partnerships with the IUCN, IFREMER and the DAF made it possible to install the first Argos tags. From 2002 to 2006, other Argos tags were placed on marine turtles at the beginning of the nesting season, through agreements with CEDTM-IFREMER/DAF, demonstrating that females returned faithfully to their nesting area, but also their post-nesting season trajectories and feeding area, mainly on the East African coast.

The agreement between CEDTM-IFREMER, DEAL and CDM allowed the experiment to be repeated in July 2011 for the dry season and January 2012 for the wet season, combined with biopsies.

These partnerships set up a trace counting programme by microlight overflight from 2003 to 2008 on 172 beaches listed at the time.  Thanks to these overflights, the CDM's former Sea Turtle Observatory updated the mapping of the beaches, referencing 200 beaches. From 2007 to 2017, daytime field inspections every two weeks of around fifty beaches contributed greatly to our knowledge of use and threats.

Aware of the stakes involved in preserving these species, the Departmental Council has ensured, since March 2006, the continuity of these preservation actions by providing the means and continuing the deployment of teams of agents on various beaches to carry out surveillance actions to dissuade poaching, individual monitoring of females, monitoring of egg-laying sites and raising awareness among the population.

Since 2018, the teams have been concentrated on 3 sites: at Moya, where 13 agents have been working in teams of 3 to 4 agents every day since 1998, and a regular presence in the south-east (5 agents) and south-west (4 agents).

The data collected allow us to improve our knowledge of the distribution of these species and the evolution of their population on these beaches. Of the 172 beaches overflown, three quarters were visited at least once by marine turtles, of which about fifty were heavily visited. At Moya1, an average of 2251.8 ascents per year (data from 2001 to 2015); given that a female comes to the beach to lay an average of 3.03 spawning (Bourjea et al. 2007), between 500 and 700 females come to the beach each year.

In the future, the CDM will transfer its data to the regional TORSOOI database in order to extend their use.

In order to monitor the census of strandings of turtles in distress or dead, the CDM is a founding member since 2010 of REMMAT (Mahoran Stranding Network Marine mammals and turtles 0639 69 41 41), officialized in June 2011.

Active participation in this network allows for a strong partnership with several administrative or associative structures, such as the French Office of Biodiversity (PNMM and SD), the DEAL, the Oulanga na nyamba association, to better take into account the problem of turtle preservation in the territory in the face of increasing poaching and other threats.

The CDM is a key player in the Monitoring Committee of the National Action Plan (NAP 2015-2020) for marine turtles, which was drawn up in 2013.

Following the pilot experiment in Europa of the pIOT programme, 10 tags will be placed on Chelonia mydas and/or Eretmochelys imbricata juveniles in Mayotte in 2021 in partnership with IFREMER and Mayotte stakeholders (CDM, Parc Naturel Marin de Mayotte and Oulanga na Nyamba) in the framework of the IOT project.

The experience of the 5 CDM agents, through their knowledge of the sites, as well as for the capture in the water, the handling and the placing of the tags, should allow the operations to run smoothly and the renewal of this system in order to obtain data over the long term and a follow-up of possible displacements between the sites.

This regional experimentation is all the more interesting as it has already happened that a turtle ringed E1512 in the feeding phase in the Seychelles was re-released in the laying phase in Moya in 2004, 2007, 2010 and 2016.