First tests on the turtles of the experimental platform :

Tests of the new version 3 of the tag began in February with the first tagging of four turtles from the experimental platform in Kélonia. These turtles were successively tagged with a few weeks delay in order to take into account the results of each test for the following tests and to make the necessary adjustments to the algorithms.

A drone (UAV) was also used during these tests to track and film the movements of the turtles from the air. These aerial data are then compared to the actual movements recorded by the turtle tags in the pond.  The behaviour of each of the tagged turtles was also monitored underwater and an algorithm for the 3D reconstruction of the turtles' trajectory while diving is currently being developed on the basis of these initial tests.

These initial tests will resume once the confinement has been lifted, but they have already made it possible, on the one hand, to validate the overall operating principle of the new algorithms, i.e. regular GPS positioning when the turtle comes to the surface and the reception of LoRa messages sent by the tag and, on the other hand, to identify and make a few adjustments, such as calculating detection thresholds to identify surfacing events.

At the same time, the new gateways to receive LoRa messages received in January were tested and functioned perfectly. Below is a picture of some of the equipment (tripod, mast, box, battery, solar panel, antenna) that will make up these gateways on some study sites.

The tests carried out on the surface sensors confirmed the need to reinforce the protection of the surface sensor electrodes and the base of the LoRa antenna in case of friction of the turtle on an obstacle. This will guarantee the functioning of the tag surface detection sensor which is essential to the activation of the GPS and the transmission of messages. This detection is only possible if the electrical current flowing between the sensors loated at the surface of the tag is interrupted. For this purpose, the mechanical design of the tag has been reworked. Notches have been added for better protection of the electrodes and the slopes of the design around the electrodes have been increased to allow a better flow of water on the surface of the tag.

A new element has also been added to the tags: an internal skeleton. This 3D printed skeleton makes it easier to place the electronic components inside the tag before to apply resin to the tag.

Tests of the autonomous USV board: 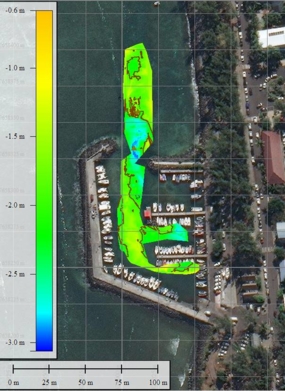 The autonomous USV (Unmanned Surface Vehicle) board developed by IFREMER and the IDOCEAN Company was tested at sea, in Saint-Leu in February. Autonomous navigation in an open environment, subjected to waves and current, as well as the single-beam echosounder were tested. The results of these first tests were conclusive and the bathymetry of the prospected zone could be carried out. These bathymetric data will allow in the future improving the geolocation algorithms by coupling the information on the depths of the turtles' movements with that of the bathymetry. The underwater camera placed under the board also worked perfectly.

IFREMER and IDOCEAN continue to work together to make further improvements to this autonomous USV board. 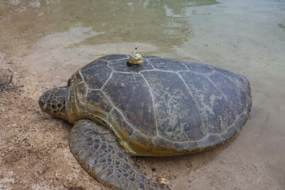 At the beginning of March, two researchers from the Montpellier Laboratory of Computer Science, Robotics and Microelectronics (LIRMM), a partner in the IOT project and with which Ifremer has been collaborating for many years on several projects involving electronic developments for marine instrumentation, visited Ifremer's Indian Ocean delegation in Reunion Island. This visit enabled teams from both organisations to exchange information on the progress of the project, in particular on the electronic and computer developments carried out for the tags and reception stations, and to take part in the last tagging test in Kélonia before the start of the confinement.

One of the three technological and scientific objectives of the IOT project is to identify the types of habitats (seagrass, coral, sand, etc.) on the various study sites using high-resolution aerial and satellite imagery, then to superimpose them on the positions of the turtles, obtained by the tags.

This identification is based on algorithmic developments, work that will be carried out by Pascal Mouquet on the different study sites of the project (Reunion Island, Mayotte, Europa and the Seychelles). The hyperspectral data collected in the different French sites in 2009 and 2010 will be used to classify habitats (grasslands, corals, sands, etc.) and to determine areas favourable to turtles by developing relevant indicators (roughness type). On all sites, satellite image data will be used to determine these habitats at large spatial scales.

This period of confinement enabled the team to make progress on the drafting of several technical documents and in particular on documenting the operation of the equipment for future users (architecture of the future database, access to servers, computer codes, etc.).

During this interval, which temporarily suspends equipment tests, the results of previous tests are analysed and translated into notes or technical reports by the team.

Ifremer is continuing the numerous administrative and technical procedures to enable the final deployment of the tags and receiving stations on the various study sites scheduled for 2020 and 2021.

Discussions with partners on mission planning are continuing while adapting the provisional timetable to the current situation. The various requests for regulatory authorizations for the project are addressed to the public authorities concerned for each of the project territories.  Numerous orders for electronic and mechanical equipment for the tags and ground infrastructures are placed so that all the necessary equipment can be delivered before the start of tests in the natural environment and then for deployment on the study sites. This period also allowed the finalization of the project's 2019 annual progress report.