From September 16 to October 20 2020, a first deployment mission (EUROPA 1) took place on the island of Europa, located south of the Mozambique Channel (see newsletter 5) and administered by the French Southern and Antarctic Lands (TAAF). During this mission, three members of Ifremer's Indian Ocean delegation updated the network of receiving stations (installed in 2019 during the pilot project pIOT) and set up a satellite station, experimentally tagged two juvenile green turtles with the new IOT tags, and carried out bathymetric and photogrammetric surveys of the seabed using the autonomous USV (Unmanned Surface Vehicle).

A second mission (EUROPA 2) was organised in 2021 with the aim of continuing the deployment of the project on Europa. Two members of Ifremer's Indian Ocean delegation and one person from the Montpellier Laboratory of Computer Science, Robotics and Microelectronics (LIRMM) went to the island from May 17 to June 24 with the support of the Armed Forces in the Southern Indian Ocean Zone (FAZSOI), the French Navy and the French Southern and Antarctic Territories.

During these 38 days, the team carried out maintenance and reactivation of the LoRa network on the island.  Based on the experience gained since the previous mission in 2020 and the analysis of the first data collected during Mission 1, a number of corrections were also made on site to the software of the receiving stations.

As part of the work on turtle geolocation via the exploitation of LoRa message metadata, the team deployed a second type of LoRa object called "GPS tracker". It is a waterproof box containing a GPS module and a LoRa transmission system and carried by the team during its various journeys (on foot, by boat or kayak). These objects were used to measure the relationship between the position of the tag (in this case the GPS tracker) within the coverage area and the reception level of the LoRa signal received by the stations.

The second part of the EUROPA 2 mission consisted of tagging eight juvenile turtles, given that the IOT project aims to deploy ten new generation tags on each of the study sites and that two individuals had been tagged during the EUROPA 1 mission. Seven green turtles (Chelonia mydas) and one hawksbill turtle (Eretmochelys imbricata) were equipped with the latest generation of the IOT tag developed by LIRMM and Ifremer (final and corrected version of the tags deployed for the EUROPA 1 mission in 2020). One of the eight tags was even a solar tag equipped with small solar panels on the top.

Some of the tagged turtles were seen again by the team in Europa's inner lagoon during the remainder of the scientific campaign.

Before each mission, the teams were trained by Kelonia at the care centre and at the experimental platform to learn how to handle and tag the turtles. 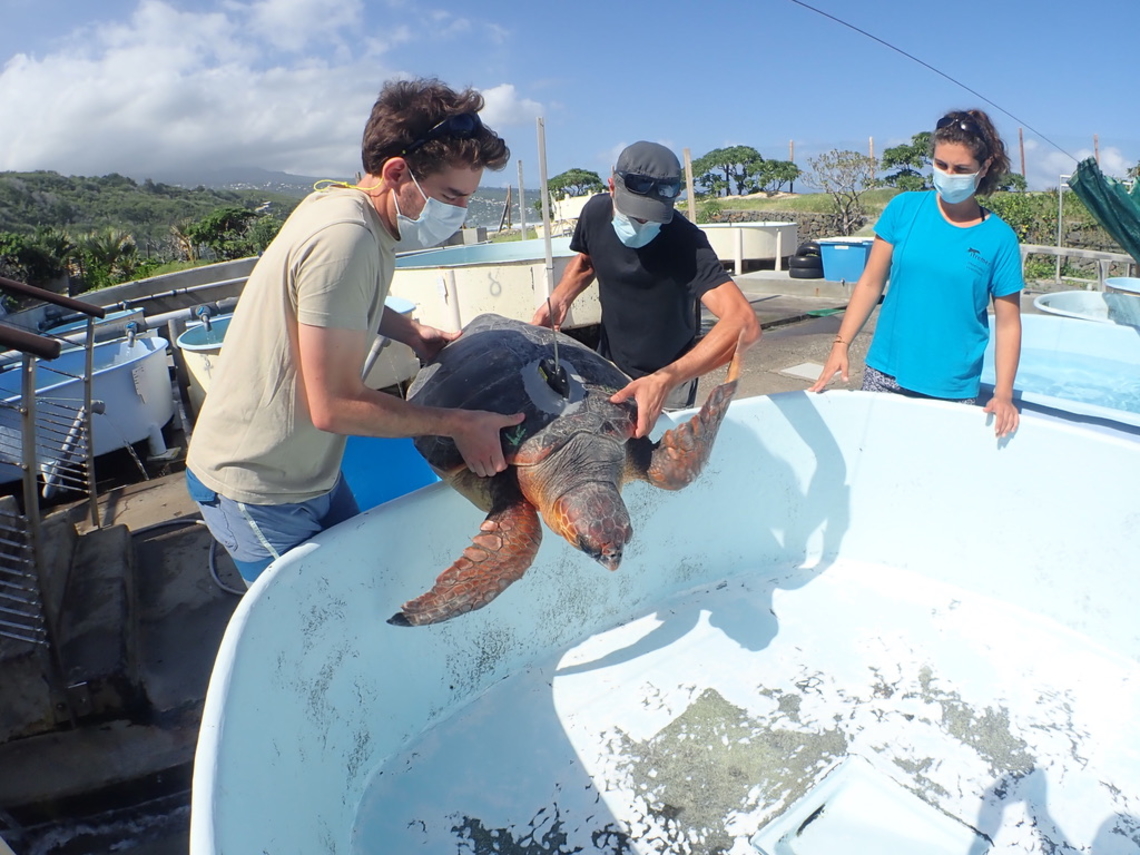 The third part of the EUROPA 2 mission was the continuation of the acquisition of bathymetry and photogrammetry data with the USV (Unmanned Surface Vehicle). A first series of surveys was carried out in 2020 during the first mission on sites known to be frequented by juvenile turtles, then at the beginning of 2021 on specific sites on the outer reef as part of the monitoring of the state of health of Europa's coral reef (sites monitored within the Global Coral Reef Monitoring Network - GCRMN) at the request of the TAAF (see Newsletter 5).